Of smuggling sausages and beers 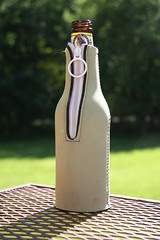 Well that was interesting! As you know, my work is way-OK with me and the #BrewDiet. My day-job is in advertising, and our industry has a history of the three-martini lunch with clients. We don't do that in 2011, but there's no violation if I have a beer at lunch. And breakfast, it seems.

But today was a little different. Huge off-site with 50+ individual representatives from our client roster. A catered breakfast and lunch in the ballroom rendered me cracking open a beer and whipping out a sausage from my briefcase rather inappropriate.

Fortunate for me, one of the client's (more that a representative: this guy is the client), somehow heard of my diet. He met me at the door with a surreptitiously wrapped turkey sausage smuggled from the breakfast bar! He said he had a beer up in his room. I told him I had a beer in my briefcase. I don't think he believed me. That's OK. I didn't believe him!

Lunch almost worked. A paella, which is traditionally (at least in Arizona) served with chorizo. But in this version, the chorizo was an afterthought, and it would have taken me way too long to pick out just the sausage. And since the chorizo isn't the central part of the dish, I considered that cheating.

So I snuck out the parking lot with lunch kit (yeah, hidden previously in my briefcase), downed a G'Knight and ate half a jalapeno & cheddar sausage. Chomped on a few sticks of Trident and slipped back in undetected.

In my next life, I'm gonna be a double-naught spy!

No one was the wiser. At least I don't think so. If I show up tomorrow with a pink slip on my desk, you'll know differently. Here's how today played out, minus the drama listed above:

That's it. Though some out-of-town friends just showed up with a six pack. Work could suck tomorrow. Ciao!