Beer + Coffee gets me through the day. Oh, and sausage. 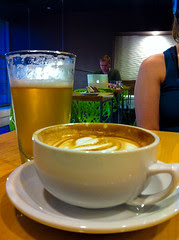 I did a slight change-up of order today, the 5th day of #BrewDiet, and that seemed to work better. Chugged some coffee early on, and the caffeine let me hold out until around 9:00 for my breakfast beer. Which was interesting, because there was a meeting called at that time. At least two of the attendees were a little shocked I was drinking a beer during the meeting.

Lunch came and went without issue. More beer. Half a sausage. The mild Italian sausage are good. They are just light on flavor. May need to add a little Sriracha sauce to it tomorrow to add some kick. Flavor I need. In a big way.

Worked a little longer than usual, so added a beer around 4:45 to end the day. That worked OK, as I had a consultation after work that kept me away from my final half of  the sausage until around 7:15. That sucked. Hard.

Ended the day with a trip to Total Wine for a re-stocking, since I'm running low. Have enough now to get me through the weekend. I'll need to load up again after that.

Hunger today: manageable. Mostly because I got a large coffee around 2:30p. And I drank one beer less than normal, so that's probably a good thing. Or bad.

Tomorrow a film crew comes to document my diet at work. No, not kidding. Rather surreal. But having fun.

Here are the stats for today:

Oh, and I've given up on MyFitnessPro. It's a nice app and all, but I'm putting in bogus numbers. Most of the beers I drink have approximations at best for calories, and it's a pain in the ass. I'm a simple guy, going for the simplicity of the Untappd checkin. If I average out 6 beers a day and a single sausage, I'm happy to call that good enough. And if any of you want to ferret out the original gravity and final gravity of the beers I'm drinking to give me a true count, have at it. Me? I'm good.

This is part of my entire month of drinking beer and eating sausage. I call it #BrewDiet. Yeah, that it. And yes, I'm serious. Want to more? Here's how it all started. I'll post daily (I hope) and keep you all updated. In theory.