Fred Casteneda has just posted an interview with me on his show, The Struggling Entrepreneur podcast. We talked a lot about Expert Podcast Practices for Dummies, Podiobooks.com and my life as... a struggling entrepreneur! Props to Fred for asking me to be on his show.

One of my other co-authors, Tee Morris, was interviewed on Fred's show last month. You know, if you just can't get enough talk about the book and feel the desire the story from another...
Posted by Evo Terra at 3:01 AM No comments:

I was bitching to the Twitterverse about the terrible muzak I was subjected to while waiting on hold. Several responses of sympathy -- and a few strange "not all muzak sucks" replies -- came in, but this was the bestest.

I just found out that that iPod Touch can play videos straight from vlogs using Blip.tv. But not if you're viewing those blogs through Google Reader. Well, not without some help.

Here's my explanation of how I made it work, and a test to see if it works for me. It took a few rounds of this, but I managed to get it when I actually uploaded a .mv4 file to Blip. Works like a champ. None of my other videos will, but all will from now on. Unless Apple figures it out and actually puts Flash support on the iPod Touch. WTF?

Nice title. But the remaining four things in my Zero Fun list can't be lumped together without just calling them... stuff.

Eye Jot
I saw Chris Cavallari post something on Twitter (which rocks) about Eye Jot and how he liked the idea of being able to to send "video voicemail" to friends, so I signed up.

Well that was... uneventful. Turns out I don't have the occasion to send much out in the way of video voice mail. With the notable exception of Mark Forman, none of my friends do either it seems.

Fluther
A collective question and answer place sounds like a good idea. But with me, I already have quite a few ways to tap into my own personal collective and get answers to the questions I need. Maybe it's helpful to those who haven't built out their networks, or if answers are needed that require different knowledge bases than your friends have. In either case, it's not for me.

Plazes
Real-time info on where I am and where I've been? Sounds kind of cool to me, the guy that lives out loud and isn't above letting his social circle help plan out his activities. But no one I knew or knew me was here, so it felt a little masturbatory to me.

Pownce
Cool idea. But all my friends were and still are on Twitter. Thanks anyhow.

And that's it for my current list of Zero Fun items. Next week (or maybe sooner should the mood take me) I'll get to work on the Was Fun list. And as I try new things, I'm sure at least one or twenty will wind up in the Zero Fun pile.
Posted by Evo Terra at 7:18 AM 3 comments: 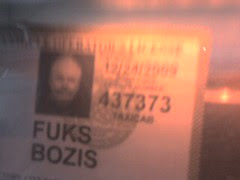 What do you do when you get in a cab driven by a driver with this name? 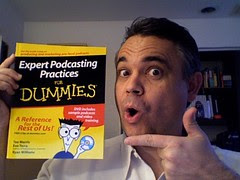 The New Expert Podcasting Practices for Dummies is here!

Based on comment I I saw on Twitter yesterday, I'm guessing I failed to put the news out about this months ago.

If you've seen it in stores, let me know. I've checked the big chains around me and have had zero luck. Heard from someone in Australia also having trouble. Maybe the "expert" books don't sell so well in the stores, and you have to get it online?

Special thanks to Ryan Williams for stepping in and covering a few chapters for me when life got in the way.

For the third installment of my re-visiting of "web2.0" sites I signed up for but never bothered to use much more than a day, we take on the concept of "people search". Unlike a few other new things, I was immediately skeptical of this concept. I mean, what the hell does "people search" mean, anyhow, and exactly who thinks they can beat Google at the search game? Not that Google is unbeatable, mind you. But I wouldn't exactly call it difficult to find out something about someone online using their search box.

Still, others have tried. Whether or not they've failed, I leave to you:

Wink
I'm guessing this is an aggregation site of all the various places I post stuff, where the idea is to kick out a "life stream" of me. Maybe. Hell if I remember. That's what it shows about me, but damned if I know what that has to do with anyone anywhere finding me.

Gleamd
Here's a site I never got, not from the beginning. It looked like some sort of popularity engine, but I could never figure out what it was trying to be. Biggest failing: anyone can set up a profile on anyone, and normalizing the data is a nightmare. No, not a nightmare, just impossible.

If there's positive applications to these two, let me know. Profiles are still there. Maybe I'm slow and it will eventually set in.
Posted by Evo Terra at 10:37 AM 1 comment:

In my second posting in this series, I take on the concept of social review sites, one of the many factions of "social media" sites. And honestly, I see a great application for the "socialization" of review sites. Passionate people who want to hear of the experiences of other passionate people, are you kidding me? It's a match made in th heaven that is the graph.

But I'm no angel.

The trouble is this: I don't care. I value people's opinions and I'm happy to seek out those opinions when I'm in the market for something. But then I quickly go back to not caring. Hence, neither of these found any usage past my initial investigations.

ViewPoints
I wrote a glowing review of VeiwPoints (double-irony noted) when I discovered VeiwPoints. Everything I said there remains valid. But see my earlier "don't care" comment. Nice execution. Hope others like it.

Yelp
Yelp has been around a while, and puts up some impressive numbers of individual reviews and ratings. I was impressed with the interface when I was looking for a dim sum place near my new home. I was quite happy to see that two places garnered fantastic reviews. I went to both, found the reviews to be spot on... and never found another reason to return. To Yelp, that is. I go eat dim sum at either place all the time. Damn good dim sum in Chandler, AZ.

Today (night, really) marks the first post in a multi-part series. Plenty of folks have risen who will tell you all about the latest and greatest "thing" on the interwebs. But how many of them will tell you about the things that they no longer find useful? I am your man.

So I'll still be adding new networks, widgets, sites and applications as I find out about them or someone recommends them to me. Everything will go in the Newly Fun pile for a couple of weeks. After that (and I'm treating those two-weeks as if they were on Island time), I'll move them to the Still Fun, Was Fun or Zero Fun list. And I reserve the right to move things in and out of those buckets. When it happens, I'll make it a point to tell you.

Starting from the bottom and working my way up, I'll cover some social networking sites that I tried out that never caught my fancy.

Gooruze
Gooruze is a social media site for people in the online marketing community. Now you'd think that would be right up my alley, right? Well... no. I've noticed a lot more crossover between my "fun" and "day" job. This site doesn't help. It does a good job of telling me all that I'm missing by not checking in more often, but I find myself really not caring about those conversations.

Terranaires network on Ning
Have you ever thought yourself so damned self-important that you need a social network all about you? You're wrong. Ning is a very cool site and I've used it to create a community for Podiobooks.com authors, content creators and fans. But it was really pointless of me to create a community of 'me'. My only saving grace is that I never once told anyone about it before this. So I'm really not that vain.

Perfspot
Speaking of "day" and "fun" crossing paths, I joined this site because they wanted one of my clients to advertise on their site, touting themselves as the fastest growing network EVAR. Well... whatever. If you think MySpace is bad about pointless friends and blatant pr0n wannabees, this site has 'em beat hands down.

Trig
Trig looked cool. Like a social network for people who cared how the site the belongs to looks and feels. Yeah. Well. Pretty sure the only friends I have there people I brought in. Sorry folks. Not for me.

Virb
I'll admit, Virb looks cool. But after being on for an untold number of months, I had a whopping eight "friends" -- and only four of them I actually know. I got a lot more requests for friendship than that, but they tended to be for bands and chicks who got kicked off of MySpace for trying to get people to look at nekkid pictures of them. Not that I'm opposed to either of those things, but they don't really server any purpose for me.

So there you have it, the first batch of Zero Funs. All of the profiles are linked, and I'll get an email if friend me. Feel free to show me the way!
Posted by Evo Terra at 10:39 AM 3 comments: