Losing never felt so good on the #BrewDiet 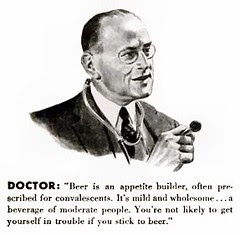 Last week, when I saw my doctor for my weekly check-in, I had lost no weight but did drop 4.5 lbs. of fat. By eating sausage and drinking beer, which are the tenets of the #BrewDiet. To which my doctor replied:

So for those people who say beer makes you fat; fuck 'em.

I love my doctor. $20 says you don't get that sort of straight shooting talk from yours!

The nascent scientist in me is interested in those increasing fat numbers. And not in a good way. But that sub-personality is way overshadowed by the boy screaming "I've lost nine fucking pounds drinking beer and eating sausage! W00t!"

So I'm going to ignore the fluctuating fat for a while. We're 1/2 the way though this experiment. If Terry has something to say about it, I'll let him. Other wise, I'm going to have another beer. Tomorrow. It's late.

Here's my intake for the day: