The realities of compatability with #BrewDiet and a day job 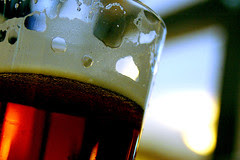 The reality of #BrewDiet hit a few people at the office a little harder today. A typical exchange went like this:

Really, you're not just drinking beer and eating sausage the whole month, are you?

No, really. You're not just drinking beer and eating sausage the whole month.

No, I'm serious. You really are not just drinking beer and eating sausage the whole month.

Er... yes I am. I fought a little misconception at the day-job today. We have an alcohol policy (throw back to the Mad Men-esque years of my current profession) and I'm willing to follow it to the letter. I reminded them that it's not all that unusual for me to have a beer (or two) at lunch  and I manage to get through the afternoon just fine. This will be just like that. Only I'll have a beer before I get to work. See? Virtually no difference at all.

The team I manage is going to do their own little play-along, documenting my mood and attitude toward them as the month progresses. I think that's an excellent data point to have! But being the cut-ups that they are, I fully expect to have surreptitiously filmed videos appearing, in some mocumentary of what it was like to work under The Monster Who Only Drank Beer and Ate Sausage For a Month. That's OK, kids... bring it!

#BrewDiet is going to be awesome. You can be awesome and contribute some of your local fare -- that's quality craft beer or fantastic sausages -- if you want to  get involved. You can also follow my beer-as-it-happens antics via Untappd. And of course, I'll keep blogging, tweeting and Facebooking the whole thing as it unfurls.

First support, then rejection of #BrewDiet 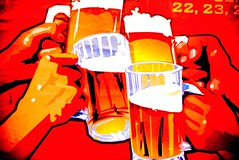 Word of my little experiment is getting around. And even though Untappd declined my request1 to create a badge for drinking along with me during #BrewDiet, plenty of folks are jumping in with support! Like...

Thanks for the support, guys! And welcome to the sausage fest! No... wait. That didn't come out right. At any rate, I appreciate you joining me for #BrewDiet.

Want to get involved? OK! Just drop me a line and let me know what you're planning on doing. I'll keep a running list of who's in and to what extent. Maybe do a weekly summary of the #BrewDiet Nation? No wait... #BrewDietitians! Love it!

October 1st hits this Saturday. What should I have for my breakfast beer and the kick-off to #BrewDiet?

1 - Hey, I can't blame them. They probably get loads of people emailing them all the time with "make a special badge for me!" requests. But I still love the tool Untappd provides and will use it every time I drink a beer on my #BrewDiet.

Beer and sausage for a month? Are you nuts? 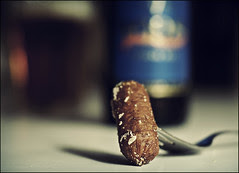 No, not in a clinical sense. Though I certainly march to the beat of a different drummer. But nuts? I'll leave that label to those who've earned it.

As I mentioned this morning, I'm doing this under doctor supervision. And not in a condescending "as-your-physician-I-cannot-recommend-this-course-of-action" way you might expect. No, my doctor in in full support. Why? His answer comes in the first paragraph of a blog post about our unorthodox dietary experiment:

My good friend Evo Terra is going on a special one month diet – it was going to be just beer but I convinced him to add some sausages (including my favorite, reindeer sausage).  If you have been influenced by popular press you are aghast at what Evo is doing, and how can a physician supervise such.  The answer is- because we need to know.

And know we shall. I highly recommend you read the whole piece, especially if you have preconceived notions on what good nutrition is or is not. I know I've been led down the wrong path before. It happens. Science isn't immune to data manipulation and just bad work. But it is rather good at self-correction.

October 1st is just a few days away. I'm looking forward to this! Especially if Terry is cooking...
Posted by Evo Terra at 1:41 PM 3 comments: 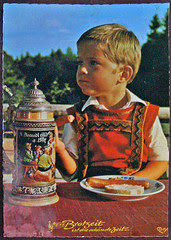 Did you hear the one about the guy who's diet consisted of nothing but craft beer and sausage for the month of October?

Me either. But you're about to. Me too, since I'm the guy. That's right. During the month of October, I'm only drinking beer and eating sausage. Yeah. I'm serious. And yes, I'm being monitored by a physician.

In case you hadn't heard, I like craft beer. A lot. I've been pondering the idea of a "beer fast" for sometime now and am ready to give it a shot. Oktoberfest seems a good time to try it. And unlike those who've attempted to re-create the monks' habit of fasting with beer-only, I'm playing fully into the spirit of the season, adding sausage to my diet. Hey, my doctor says I need a little protein to retain muscle mass, and who the hell am I to argue with a doctor? Especially when he says I need to eat sausage!

My plan is pretty simple and is as follows:

And I'll keep it up for the entire month of October. Which, with client meetings and travel, will be interesting. But I'm nothing if not tenacious.Yes, I'll drink plenty of water. And I'm rather addicted to my morning yerba mate, so that's continuing. But other foods are out. Call me crazy.

I'm also reaching out to the fine folks that run Untappd, a beer check-in app that I've been evangelizing for a while. I'm hoping to convince them to make a special badge for people who drink along with me. No, I don't expect you to try and keep up with me. But maybe you win a badge if you drink one beer with me each day, or maybe 5 of the beers I check into each week. Not quite sure how that all works. I'll leave it to them.

Untappd is the best place to keep up with my daily drinking, though I will try and post a daily re-cap of everything here as well. I'm picking #brewdiet as my hashtag and have already secured the domain, pointing it right back here. So if you already follow me on Twitter (hint: I've moved recently) or are my friend on Facebook, you'll see the Untapped postings show up there.

For those of you who have been following me for a long time, you'll recall something called "The Magic Fridge" from years ago. I'd like to kick that off again, as I have a mostly empty refrigerator just waiting for a chance to shine. Should you wish to contribute to my month-long experiment:

Please be advised that there may be laws against shipping beer from your state. I'm pretty sure there's no law against me receiving beer, as I've had it shipped to me before. Wrap bottles in bubble wrap and pack tight with more wrapping on the box sides (all six of them) and the bottles should make the trip. Please include a note so I can give credit where credit is due. While our grocery bill will go down, our beer bill will certainly go up. Your support -- should you choose to give it -- will be much appreciated.

Someone get a doctor!

And as I said earlier, I am doing this under doctor supervision. I'll see Dr. Terry Simpson (MD, FACS) each and every week. Quite possibly at his place while he's cooking up some sausage dish for me. He says he has reindeer sausage. How can I pass that up? Terry and I are both skeptics, so we're looking forward to gathering some data on this process. Yes, we realize the sample size is a touch on the small side, but a sample size of one will still gather more data than the Paleo diet has acquired.

And speaking of data; here's where I'm starting:

That's me. Not too shabby. I've never been what you might call a thin or athletic man. Hell, not even when I was a kid. But all things considered, I could be in worse shape.

Weekly, I'll post the new numbers. I don't really have a weightloss goal with this, though Terry thinks I'll shed at least 8 pounds and drop a few percentage points. I suppose that all depends on how well I stick to the plan, right? Here's to hoping.

Wow. A post this long is making me thirsty. Anyone got a beer?

Know someone who should speak at Podcamp AZ? Nominate them!

Do you know the best way to combat OverEvo Syndrome? Get your ass up there and speak yourself! What, are you chicken? Then try the second-best way: nominate one of your friends!

PodCamp AZ is for anyone who wants to talk about "relevant media". 7 years later, new media isn't all that new. It's expanded in some areas, changed in others, and even gone through a bit of contraction. But in every area, it's become more and more accessible. To anyone. People like you, for example.

So come on up and talk. It's PodCamp AZ time very soon, and I'd love to see you there. Up on stage. Engaging with everyone. It's fun! Trust me.