Image of City of Chandler, AZ

The government has invaded social media. No, don't take that as a call to arms. I'm talking about a much lower-level invasion than that: Your city is on Twitter.

And on Facebook, YouTube, Photobucket and likely dozens more web 2.0 sites. Or they are busy trying to create their own. Some cities (hi, Tempe!) are even reaching out to denizens, seeking guidance and counsel as these municipalities move towards a closer relationship with their residents. And that's a Good Thing.

But when you start talking to people in their medium of choice, you have to start talking to them in their language of choice. And that should spread to the rest of the communications. For far too long, cities' websites have been vast wastelands of non-speak, bureaucratic ramblings and -- to speak plainly -- shit that only a handful of people truly care about.

Let's get specific. I live in Chandler Arizona. I've met Kim, the fine person who runs the @CityofChandler Twitter account. She's doing a good job of engaging with the community and posting relevant and timely information to her followers (well, the city's followers) on Twitter. But she's hobbled by that drivel that exists on the ChandlerAZ.gov website. Take this recent tweet.

We're in the peak of monsoon season right now, if the frequency I have to clean my pool is any indication. So yes, the tweet was timely and relevant. The "monsoons" we get in the southwest are often scoffed at by many of us who've been here a while. But they can be pretty scary to anyone unfamiliar with their dangerous-albeit-local fury. All the more reason why information on this topic from my city should be a Good Thing.

If only the information on the page offered up by the city was valuable. But it's not. Well, that's not entirely correct. The information could be valuable, if it were written to convey information to normal humans. But instead, we're treated to an incomplete sentence to start off the post. Not a warm fuzzy. But I can easily overlook that, as I'm no one to call out poor grammar and spelling errors. Our first directive is a point of contact. Who's listed first? 9-1-1. Yep. If you find yourself in a thunderstorm and have the urge to speak with someone, call 9-1-1. Right.

Next up is information on when you can expect thunderstorms and lightning, followed up the this juicy tidbit: "[they] can occur year-round and at all hours". Good for those of us who just left the womb. And then it spirals completely out of control, suggesting we shut off our air conditioners (are you mad?) and to avoid bathing. Bathing. But it is good to know that the human body does not act as a capacitor, holding the charge of the lighting that struck it. Yeah, that's in there, too.

But I get why they may think they have to say this stuff. Why they think this is good information to distribute. But it's not. Or rather, it's not written to be good info. Presenting information is an art form. A craft. Data-dumping isn't helpful. Organizing data is helpful. Concise explanations -- especially for things you know will sound odd to most people -- are helpful. Re-writing the information to make it flow on the page and be consumed easily is helpful. Do that.

The same applies to non-governmental entities, too. How does the information you've been dishing out for years stand up under scrutiny? Are you writing for readers or just following orders? And... does anyone care to read it? 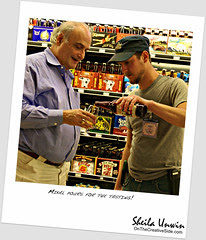 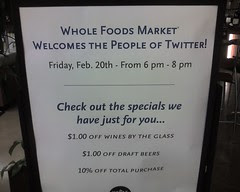 Man on a daily mission

If you haven't heard the news, I've had another life-altering July. More about that later.

I recently met a guy from Philadelphia. Eli likes to have fun and he wants you to have fun. But he doesn't want to waste a bunch of your time. Though you are free to do so if you like. Eli has created a site called Daily Mission. Daily Mission has a single aim: to get you and others collaborating on some good old fashion fun. Things like posting and commenting on silly pictures, caption contests and funny phrases. Yes, there are legions of sites like this on the web. But Daily Mission's aim is to get you in, get you contributing, and get you back out. In seconds, if at all possible.

Eli and I have been chatting about my joining his team. It's currently staffed by two developers and a UX person. They're looking to add someone who can provide strategy and guidance. A grizzled online veteran who still knows how to have fun. Someone... like me.

But if I join Eli, that means I'm going to be talking about Daily Mission. Quite often, in fact. And before I do that, I want to make sure that it's something worth talking about... something remarkable. I have limited exposure to sites like these though I understand their appeal. So I'm reaching out in the hopes that some of you will tell me what you think. I've spent some quality time with the site and have already given Eli some strategic and tactical advice.

But I'm just one guy. One guy who doesn't spend a lot of time on this stuff. I'm betting that some of you spend more time on sites like this. So I'm reaching out. Specifically, I'm looking for just for those who care or would care about a site like this. I'm looking for your honest evaluation of the site as it stands today. I'm not being compensated by Eli for this outreach. It's not part of a stunt. Right now, I just really want to know: what do you think of Daily Mission?
Posted by Evo Terra at 4:24 AM 4 comments:

I've been a on-again and off-again attendee at Social Media Club Phoenix over the last year or so. But I've been asked to lead something new. So.. what the heck! Here's how the organizers of SMCPHX bill it:

Social Media 101 will start at 5:30, an hour before the normal time. Led by local podcaster and general social media sage, Evo Terra, is intended to address any of the general social media questions everyone has when they start working in this space. They tend to come up regularly, so we are looking at setting up a separate time to focus on them.

So load up your questions and come on out!