I lost 6 pounds! The Paleo Diet can suck it!

OK, that's probably not fair. Let me start at the beginning. 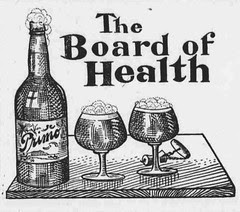 One week ago today, I went in to see my physician, Dr. Terry Simpson. My beer-and-sausage only diet wasn't slated to begin until the following Saturday, but it was a good time to establish a baseline. All that was recorded at the bottom of this post.

When I went in today to do a repeat, I had lost six pounds. Even better: 2 of those pounds were from fat! That's pretty damned fantastic.

So do I really think that 2.75 days of beer-and-sausage only caused me to drop the weight? Well... probably not. I'm making the assumption that I was more conscious of everything I ate after seeing Terry a week ago, several days before I went to the restrictive diet. I've been paying attention to what I eat for a while now, and that's part of the reason for the #BrewDiet in the first place.

But to hell with when I lost the pounds. I really don't give a shit. What is important is that I lost them. And I'll lose more, dammit!

Terry has a good write up on what's going on on his doctory-blog. Check it out. I think he said I could kick a caveman's ass. Damn skippy.

So as I said yesterday, my planning sucks. But my outcome did not suck, as I got to hang with the fantastic Thomas and Kris, flown in recently from one of the Carolina states. North... South... whatever. I married the two of them a few months back, and they are old friends of ours from when they used to live here. Amazing how a little podcasting can bring people together.

After we knocked back a few (too many) brews at Oak Creek Brewing and caught up with each other, Thomas handed me a present: A couple of brews that don't have distribution in Arizona! The Rye Hopper from French Road was the surprise of the two. Very mellow and clean. I'm a huge fan. Hoppyum from Foothill's Brewing was great as well. Matched my palate perfectly. Yeah, Thomas has been drinking with me for a while.

I got a chance to try -- and by try I mean completely consume -- both of those tonight. Ah, friends. :) Speaking of that, here's the entire day:

That brings my total calorie count to only 1519. And I'm not really hungry. Excellent. This is going well!

Here's what the doctor's machine spit out about me today, one week later. Be sure and compare with a week ago:

Here's to the next six pounds going away!

Want to get involved?

Hey, I'm not begging here. But if you want me to enjoy your local fare -- craft beer or sausage -- then send me some. You'll find out where to send it on my Contact page.

For hard-core craft beer fans, join me on Untappd. It's a kick-ass mobile app and I'm posting each and every beer as I drink it. I'm up to 19 in the three days so far of #BrewDiet! Most of those check-ins wind up on Twitter and Facebook, so feel free to re-tweet or comment on my status updates.