But tonight, I was saddened to see this tweet by fellow ex-#BrewDiet follower, Charlie the Beer Guy:

Charlie hit the wall later in the process than I. He also had arguably a much more difficult challenge. He's in a profession rhymes with "rule leacher", and they rather frown on day-drinking. So he didn't, which reduced the number of hours he had to consume 6-8 beers. So it is with a heavy heart that we bid Charlie adieu. Guess I'll just have to bike over to his place and help him get rid of all those extra beers! 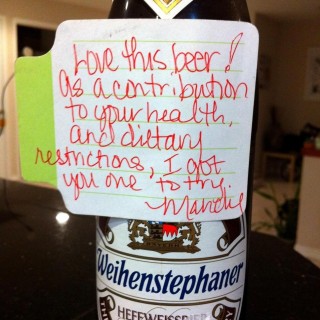 Me? I'm doing great! Still very up from my doctors appointment, and I've seen a sneak preview of the documentary video that's being assembled  by the fantastic April Simpson. She's made of awesome, so it's made of a similar element! We'll be adding more clips, so I can't show you the final product just yet. But trust me, you're going to love it!

I took another blood test today at about the halfway mark of this month. Terry said my pre-diet levels looked good. I'm not sharing them just yet because I want this set -- and maybe a post-diet set -- to compare them with. By themselves, some uneducated asshole would jump in and start arguing why this number is high and that number is low... and I want to avoid that bullshit. We're interested in a change over time, not what any single reference point looks like. That's why I've been doing weekly check-ins on the weight, fat mass, etc.. When it's time, we'll talk blood serum levels.

For now? It's time for today's stats, again courtesy of Untappd:

That's it. A few loose ends to tie up, and I'm calling it a night. A low calorie day, really. But I'm plenty full!