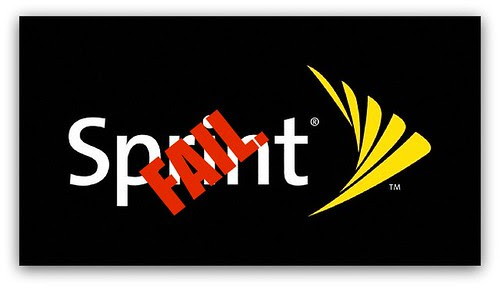 I'm very close to being done with Sprint. I've been here before over the last 10+ years and it always boils down to the same thing: Sprint's customer service is terrible. So if you'll indulge me (and this is my blog, so you have to indulge me,) I'd like to share my story from today.

I figured I'd go buy the new HTC EVO™. And yes, I gave up on my halfhearted attempts at getting them to give me one. As a Sprint Premier customer, I'm eligible to upgrade yearly. And my year was up in early June. So down to the store I go.

Ceser was great. He managed to produce two phones -- the plan was to buy two of them to replace our getting-worse-by-the-day Palm Pres -- and started the process. But he was quickly thwarted. Seems that my phone number wasn't the one that had the "Premier" status associated with it. Neither was it associated with Sheila's. They stuck it on NJ's number, for some inexplicable reason. No, he couldn't fix it there in the store, but it should be cleared up quickly enough with a call from me to... Customer Service. Que the "dun-dun-DUH" effect.

The first person I talked to (from Topeka, Kansas, she proudly offered upon answering) said they could easily make my phone the primary number, in effect associating the Premier status with me. The problem was that it wouldn't be active in Sprint's computer system until the start of the next billing cycle. Next month. So those phones Cesar found? Not gonna happen on a free upgrade.

But I'm no fool. I asked if she could bring in a supervisor to see if things could be hurried along. Since I'm right here, right now, and ready to purchase. After a few short minutes, I'm on the phone with Cindy(?) from Albuquerque, New Mexico. (There's probably a good reason for telling customers where the rep is located, but it escapes me right now. I mention it because I thought it humorous at the time.) Cindy informed me that the prior rep was incorrect, and that it might take several billing cycles before the error could be fixed.

This didn't sit well with me. Mustering some righteous indignation for my voice, I impressed upon Cindy the inconvenience lumped upon me due to a clerical error. I also mentioned I cared little for "the process" and wanted to see if someone might be able to force a change through their system outside of said processes. Acting upon this new found line of reasoning, Cindy checked with a manager. And wouldn't you know it! There was indeed a work around.

Turns out that the person -- she made it sound like the ONLY person -- who could fix the issue just happened to be there in the Albuquerque office. But the fix would not be instantaneous. This unnamed person would begin forcing the change right away, but it would take some time. How long? Cindy wasn't sure, but she was sure it would be longer than a few minutes. But the unnamed person with the magical fingers departed work at 5:00p local time, so it would be before that. Huzzah! A solution had been found.

Not wanting to waste a trip back to the store, I asked if I could receive some sort of notification when the change had been made. Cindy said that she would call me as soon as she received the confirmation email that the work had been completed.

That was... 3 hours ago? Cindy hasn't called. I called Cesar back at the store to see if the status had been moved in his system. It had not.

So thanks once again, Sprint, for living up to your continued reputation of shitty customer service. I hear that new iPhone 4G is pretty slick.

To which I replied:

And that earned me the following suggestion:

So I did. I emailed all the info, starting off with "The details can all be found here" and including a link to this post. They just responded to me with the following fantastic reply"

Thank you for your email. We reviewed your account records and found that phone line (928) 593-9678 will be listed as the Premier line of service effective July 7, 2010, which is the first day of your next billing period.

According to www.sprintrebates.com, you are currently eligible to upgrade that line of service. I recommend visiting a Sprint store location and speaking with a member of management regarding your upgrade options.

As you might imagine, that's not response I was hoping for. Yet completely within the realm of what I expected. Here's my unedited reply back:

The answer to both of those questions is an obvious "no". Please
change your account to SprintCaresNot.

Wow. Can't wait to see how this ends. Not. Though I'm pretty sure I can predict the future.
Posted by Evo Terra at 10:50 AM 24 comments:

Talent is more about technique and less about tools

I'm fortunate to have lots of friends with talent. Talents come in many shapes and forms, but it seems a large number of mine are talented in artistic ways. I'm not without skills in this area. I'm just without the drive necessary to hone many of those.

Take video editing. I did some very VERY basic editing back in the late 80s. When it was hard. Well, maybe not hard. Manual might be a better word. But it's all digital now, and things are less-manual. But it still takes talent to go above and beyond. And if you've seen any of the videos I've ever put up, I don't have that talent. Or at least I haven't taken the time to hone it.

But my young friend Brent Weichsel has. For barely existing on the planet two decades, the boy knows what he's doing. And will only get better. Among the projects he's done is a a video for Scott Sigler's Ancestor contest. It's dark. Disturbing. Minimalistic. And really well done.

Did I mention disturbing? Yet I love it. It shows that you don't need a lot of bells and whistles to make something fantastic. You just need... talent.
Posted by Evo Terra at 4:51 AM 2 comments:

For months, I've been walking around, singing songs aloud that no one has ever heard of. That's not all that unusual, as my musical tastes plunder the eclectic. But recently, there's been an air of exclusivity to my music of choice. I was fortunate enough to get a copy of George Hrab's Trebuchet before it was available. And yes, I gloated. Loudly. And with feeling.

But that time is over. George has asked me -- and a host of others -- to make the .mp3 version of his entire album available as a single download here on my site. An honor to which I am happy to oblige.

What kind of music does George play? Well... that's hard to classify. And why I like him so. So I won't even try. If you're a fan of odd time-signatures like me, Hrab's music will appeal to you on a deep level. If you have no idea what the hell an odd time-signature might be, don't worry. No advanced music appreciation classes are necessary for the enjoyment of this album.

The image associated with this post is a word-cloud of the lyrics. The larger the word, the more often it's used. If you are fortunate enough to know George or his work, you'll immediately know why "know" is so prominent. George's music is smart. You will be, too, after listening.

So enjoy. And go buy the CD from CD baby. It comes with an incredible booklet. And everyone needs a backup. Plus, it supports an amazing (and I don't use that word lightly) artists doing incredible work.
Posted by Evo Terra at 5:00 PM 5 comments: