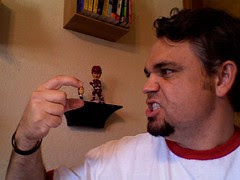 Since when was it out of fashion to be small? I, for one, enjoy the niche side of life and find it much more liberating to have, you know, actual conversations with clients and customers, rather than treating them like a number. Granted, I don't expect this sort of treatment from a company like General Motors.

But small companies should not look at this impersonal service as the hallmark of being large. Rather, it's an unfortunate side effect of being too large to personally get to know and manage your clients and/or prospects. Trust me, if they could do it, GM and other large organizations would kill or die to have a quality one-to-one relationship. But because it's so cost prohibitive for them, they have to fake it.

Some small companies, when trying to portray themselves as a large company, adopt this same posture. It's unfortunate, and just makes them look desperate for attention. Plus, it pisses me off and changes the way I think about the organization.

So stop with the chest puffing and give some personal touch. Especially in such a small market as podcasting, OK? You know who you are.