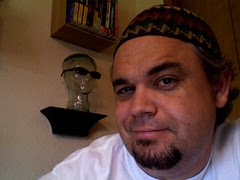 Nice hat. Got up early, showered, and then went back to bad. Hat hair. Hence, hat.

Busy day of catching up at work, so not a lot of idea generation from me today. Tomorrow could be different. This afternoon, I spent a lot of time adding some new social media sites and updating my Places page. WordPress is having an issue with some of its function, and it's not looking as pretty as I want.

But fear not! Dan S. has volunteered his services to get this place in tip-top shape. He rocks. We're talking next week, so expect some fanciness after that. Until then, deal.