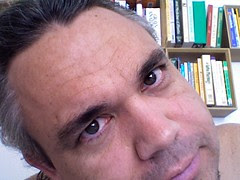 I consider myself a fan of science fiction. That status is open to interpretation, as some people equate "fan" with the original meaning of an abbreviated version of "fanatic", which I am certainly not. And I recognize others are. But languages -- especially the English language -- are fluid, and the accepted meaning of "fan" is now "someone who likes". And I like. But I don't 'dress up', I don't own a light sabre, and I don't blindly follow the industry, authors, producers, actors or directors and fall in love with their next project just because it's scifi and I'm "supposed to". And that sometimes puts me at odds with the crowd who assume that all fans are -- or at least should be -- fanatics.

I noticed a post from Debbie yesterday that a campaign is underway to save The Dresden Files, currently the recent SF show to be placed on the chopping block from The SciFi Channel. (I posed a comment on her LJ blog, then realized that the social aspect of the campaign gave me an excuse to talk about it here as well.) This may be the more creative of the "Save [insert show name here]" campaigns; supporters are encouraged to send a drumstick (as in, used by drummers, not a part of tasty poultry) to the president of Skiffy (a less-than-affectionate term for The SciFi Channel for those that need the reference) with the protest message "SAVE DRESDEN" marked on the instrument.

Interesting and novel as the campaign may be, drumsticks won't help save a show that sucks. Yes, I know that there are die-hard fans of SF who want every SF show ever made continually produced through the end of time. And yes, there are the die-hard fans of Jim Butcher (I, too, enjoy his writing style) who think this particular adaptation of his books is high art.

Unfortunately, a good number of people who like SF and enjoy Butcher's books think this show blows as hard as Enterprise did -- and we're not watching. When networks notice (don't get off on the measurement tangent, please) a show isn't bringing in the audience, it needs to go. That's not the fault of the original content that inspired the show. And it's not the fault of SF as a whole. In fact, it doesn't matter wherein the blame lies.

A turd is a turd, and sometimes the collective wisdom of the masses is appropriate. This incarnation of Dresden needs to go away, and they (whoever the hell 'they' are) need to try again. Note that this is not a blanket statement saying that television studio executives always make the right decision. Some times they make decisions that piss me off, too. See Firefly, Police Squad, Dinosaurs and Farscape for reference materials.

If you are fan, bust your ass to save the show. That is your prerogative, and I'll not stand in your way. Make your Facebook groups. Launch an email campaign. Storm the castle both figuratively and literally. Use every tool in the chest -- web based and real-world -- and make your feelings known. But I reserve the right to stand on the sidelines, commenting on how this is yet another example of hope's desire to triumph over experience.