I'm not one to jump on the nationalism bandwagon, but it's pretty clear I think that Phoenix rocks. But not because of some arbitrary lines drawn on a map. And I'm not beholden to any specific municipality. When I speak of Phoenix, I'm talking about the greater "Valley of the Sun" that makes up nearly 70% of the population of Arizona. My admiration for this area comes not from our great climate -- though it doesn't hurt. And not from any government infrastructure, corporate footprint or professional sports team.

No, I love this community. I take great pride in the community events that I've been a part of. Sometimes as a passive participant and sometimes more active. Quite often building a community is hard work. And occasionally a pain in the ass. But so are all things I hold dear. 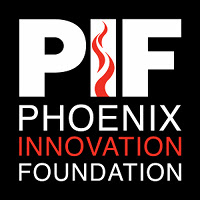 Today we're officially launching the Phoenix Innovation Foundation. PIF for short. It seems a logical offshoot to the way we're growing this community, borrowing heavily from other self-created communities around the country. And PIF doesn't make Phoenix great. It's just one more thing that makes the Phoenix community great. I hope it will be a catalyst to do more great things. I hope it inspires and assists those already working hard to build this awesome community. And I hope it can act as an inspiration to the communities growing all around the country. Oh hell... make it the world.