Having epic amounts of fun 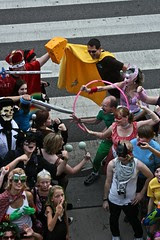 Last night was the Epic Super Hero/Villain Battle 2009. I helped organize the event as part of Improv AZ. Additionally, I took on directorial duties to coordinate the Hero-side of the battle.

As you can see from dozens of pics on Flickr, the battle was a smash success. Truly meeting the "epic" descriptor. While it looks like it went off without a hitch -- a hitch there was. Scottsdale Fashion Square security intercepted my intrepid band of heroes before we could step foot inside the mall. After some tense negotiation (kidding -- everyone was quite friendly) between our group, security and a lone police officer, we were allowed to pass through the mall sans masks. Since the battle was taking place outside of the mall-proper (you don't think we're stupid enough to do this inside the mall, do you?), we modified our plans slightly and proceeded.

Which brings me to the point of this post. You see, Improv AZ is fun. PodCamp AZ is fun. Hacknight at Gangplank is fun. Ignite Phoenix is fun. And #evfn is a heck of a lot of fun.

I'm working a full time job now. With a 45 minute one-way commute. And I'm still dedicating 15 - 20 hours a week to my duties for Podiobooks.com1.

I spend a lot of time on things that are fun. And when something stops being fun, I stop doing it. Save the work stuff. But I try and make that fun, too.

Are you having fun?

1 - Podiobooks.com is a hell of a lot of fun. I put it here in the "work" paragraph because it's more than fun, and I can quantify the time.