On Sheeple and advertising - a story of irony 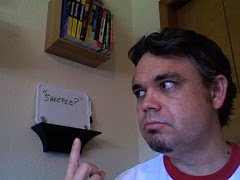 I know that most of advertising is pretty clueless. Hey, I work in the industry, so I have the right to say this... because it's true. And often times, the irony is priceless.

Take the term "sheeple", an amalgamation of "sheep" and "people" -- referring to people's tendencies to behave like sheep, blindly doing what they are expected and told. It's a great term that I don't use often enough.

So imaging my surprise when I learned that Scion was using the term as part of their non-traditional ad campaign:

"Little Deviants," the new campaign from ATTIK, reinforces Scion's business model around personalization and after-market customization, while positioning the car as a Neo-like saviour in a drab, Soviet-bloc world of buildings and streets where factotums wander around with brushes painting everything grey.

In the campaign, xD is a kind of automotive anarchist, running about with a cohort of gremlin-esque deviants, attacking the battleship-grey world of "Sheeple."

Is the irony lost on you? "Please don't be a sheeple and buy our car, just like we're telling you to do with this non-conformist and non-traditional ad campaign." Yeah guys, I get the appeal. And the rest of the campaign sounds like a lot of fun. But you lost me with "sheeple".