Bad Ass Brews Cruise and Me 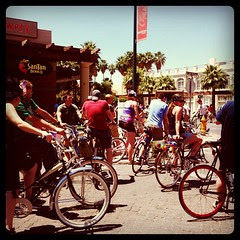 Yesterday kicked off American Craft Beer Week. I celebrated by taking part in the Ameri"CAN" Bad Ass Brews Cruise. Along with a hundred or so other more-beer-than-bike fans, I rode about 20km on a four pub route.

But don't let my full regalia of biking gear fool you, this event placed much more emphasis on brew and cruise than bike. Our leisurely pace resulted in some 3 hours of total transit time. It also left enough time for a quick side jaunt to do some tequila shots with my new girlfriend Meg and her lovely friends.

Despite all my friends chickening out on the event, I had a great time. I met a bunch of new friends and uncovered a new side of the Phoenix beer scene I never knew existed. They do these periodically, so I'm looking forward to the next. And after reading this, maybe you'll join me next time?

And don't forget: The first Ameri”CAN” Canned Craft Beer Festival is next weekend. You'll want to get tickets now. :)