Like any good husband, I can't say no to my wife. That's why I'm doing the Warrior Dash in April. Take a 5K run, mix it with a load of obstacles (yeah, obstacles) starting at the halfway mark, toss in a dash of Viking-inspired hats, and you've got the run. Oh, and a beer at the end. So that's something. Though I think it's shitty beer. May bring my own.

And at 10:30 on Sunday April 30th, I'll be joining other dumb-asses in this self-induced torture. 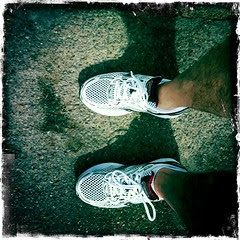 [/caption]Training has been going less-than-spectacularly. Shin-splints like I've never suffered before. Like would just rather lie down and chop my legs off painful. Seriously ouch.

So I took a quick poll of the conventional wisdom (yeah, not very skeptical of me) and decided to invest in some quality running shoes. Saucony brand from The Running Store for those keeping track. I've made two trips in them so far and can say (yes, I know it's an anecdote) that my shins feel much better. That's a good thing, since I spent a couple of weeks' groceries on the damned shoes.

I really struggled with posting this here. This blog is ostensibly about the fun things I'm doing. And right now, this whole running thing isn't anywhere near fun. In fact, it's so far from fun that light from fun takes millions of years to reach it.