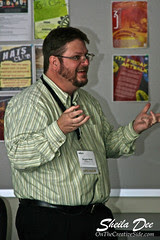 Douglas E. Welch is smarter than me. It's that simple. He's also nicer than me and generally more helpful and caring. I strive to be like him. I fall terribly short. I'm grateful that he's allowed me to be the point-man for New Media Interchange Phoenix. And someday I hope to follow through on my plans. It's a good thing we're friends, or I'd have to have him wiped out for making me look bad.

CareerCamp Online is an unconference in the style of BarCamp, PodCamp and other “camp-like” unconferences. All attendees are highly encouraged to also give a presentation and, at the very least, participate in the conversation.

CareerCamp Online seeks to provide the best and most current career information possible , especially in light of the economic downturn and the large number of layoffs.

Since career problems effect everyone regardless of geographic boundaries, I decided to opt for an online version of CareerCamp so that as many people as possible could participate.

I'm signing up now. You should to. If you're not familiar with the "camp" conferences, they are legion. Read his post for more info. And come join us. :)