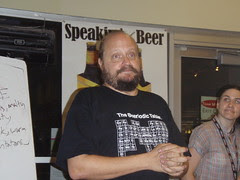 Image by evo_terra via FlickrMy friend Charlie has a beer podcast. It's called Speaking of Beer. And he... speaks of beer. Lots of different types of beer. And when he wants to speak about hoppy beer... he calls in the pro. Uh, that would be me.

I'd also been drinking already when Charlie and I decided to do a show. Which means I through pretty much all of my "5 Reasons Why Your Podcast Sucks" rules out the window. Hey, nobody is perfect.

But Charlie obviously wasn't too offended. He asked me to help with his video contribution the Beer Safari Holiday Beer Exchange Video Special (or whatever it’s called). I don't think that's live yet, but you can read Charlie pontificating on the event (and more) here.