Final exam results of the #BrewDiet

Well... that was that. Yesterday was the final day of one month of drinking beer and eating sausage. I called it the #BrewDiet. And it was a grand time. And it was for SCIENCE!

Thanks to all of you who encouraged me along the way. Extra thanks to those of you who contributed by sending me beer. Much appreciated!

OK, let's get right down to it.

OK, that's the intake. What about the results? I think you'll be pleasantly surprised. I know I was.

First, let's set the baseline.This is important to those of you keeping score at home. None of these things changed in the last 31 days:

But here's what did change. I'll give you before and after numbers from the doc's fancy scale:

Here, let me help you with that math: that's a loss of 13.5 pounds! Fuck it! I'm rounding up! 14 pounds LOST. Eating sausage and drinking beer!

But hey, that's just weight. We all know that weight changes with fluid. Is it all that surprising? Let's look at the rest of the numbers:

That's a net lost of 2 BMI. I'd be more excited, but I don't know what BMI means. But it's down by two, so that sounds  good to me. If you care, look it up. If you know, good for you! I don't care. Don't bother telling me in comments. Because I don't care.

OK, I'm smart enough to figure out percentages. That means that I lost 4% (rounding up, remember?) of my my mass as pure, nasty fat. That sounds pretty fantastic. And according to the "target" numbers on my doctor's fancy scale, that's within the "desirable range".

But let's not get ahead of ourselves. That Fat % number translates directly to fat mass:

If the word "fat mass" doesn't sound nasty to you, what the hell is wrong with you? I've dropped 11 pounds of fat mass! And if I were to travel to the moon, those 11 pounds of mass would still be gone! I love physics!

But you're not a physicist. You know what the scales tell you. And those scales would say something different on the moon. And I'm not likely to travel to the moon. Ever. Which kind of sucks. But I'll get over it. Why? Because I lost 14 pounds eating sausage and drinking beer, bitches!

Yeah, yeah... some of you want to know about my cholesterol, lipids, and other funky blood serum stuff. I'm going to let my doctor discuss those results. Suffice to say that I'm not dropping dead anytime soon. In fact, my panel looks better than when I started. No, I'm not kidding. Stay tuned for that.

Keep it off, obviously. But that's a post for another day. I have some ideas... and this isn't over! If you've been following me on Facebook or Twitter, you already know the score. I'm a very, very happy man.

If you're not following me there, then you'll have to wait for the final results. Because in this post, all I'm going to do is tell you about my intake. They call this "cliffhanging". Deal. The other post will be out  tomorrow AM.

And that's it! Or is it? Tune in tomorrow AM for another installment of... #BrewDiet!

Short day. Short post. Read about yesterday to find out why.

And I'm spent. Literally. Here's to tomorrow. The last day (?) of the #BrewDiet.

Halloween party on the #BrewDiet!

Today was our Halloween party. Knowing that, I should have planned better. In hindsight, I know I should have. But I didn't, which isn't all that surprising.

If this is your first time reading my #BrewDiet posts, please understand that this day is rather atypical of the 28 days that have come before.

But hey, it was a party. So party we must. And did.

That's me on the left, dressed as a fairy hunter. Why a fairy hunter? Because my wife dressed like a fairy. An I had to hunt for her. I guess. And say hi to Ruthie on the other side. As a non-drinker, she has mad patience to show up and hang out with us sots. Or maybe we just provide ample entertainment that serves to validate her decision not to drink!

Here's the rundown on my intake:

The party was pretty epic. Thanks to everyone who came out. Assuming we're still talking, that is. 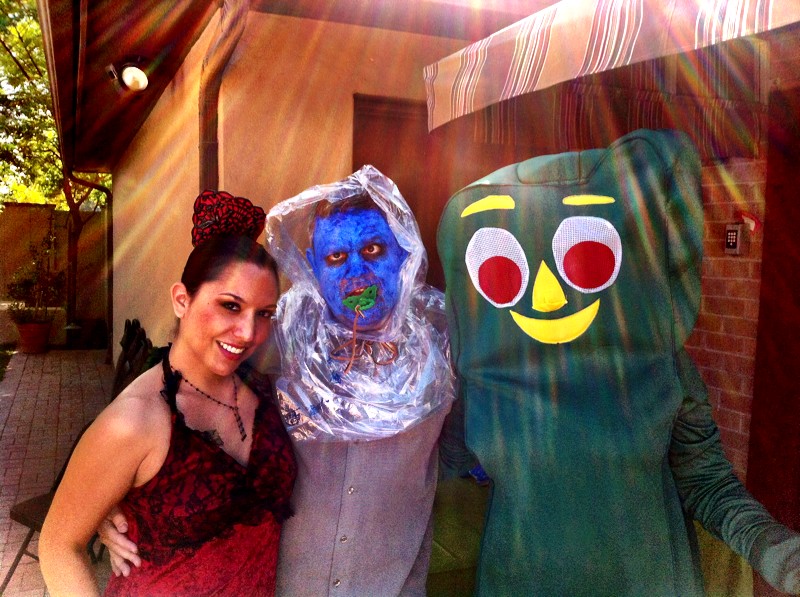